New Scythe Kaze Server Fan Controller New Scythe Kaze Server Fan Controller allows the user to choose 3 method of controlling the fan speed, manual, semi-auto, and automatic control of up to four fans with a freely definable temperature. Reading out of these temperature is done by up to four temperature sensors. Only the highest quality materials are used: Stylish brushed aluminum coupled with the illuminated blue display makes the Scythe Kaze server a premium fan controller. Precious aluminum design: High-quality materials were used when producing the Kaze Server. The front consists of brushed aluminum and accentuates the illuminated LCD display in an optimal way. Fan control and temperature monitoring: With the Kaze Server, four fans can be controlled independently, and four temperatures (in either ° C or °F) can be monitored. In addition to manually control the fan speed on four knobs, the Kaze Server Fan controller allows a fully automated and a semi-automatic operation mode. AUTO mode: Kaze Server switches off the fan, when the real temperature is much lower than the self-defined temperature. SEMI mode: In addition to AUTO mode, a minimal rpm of the fan can be defined together with the self-defined temperature. An integrated acoustic alarm function (which can be deactivated by a jumper) warns the user from overheating and failure of a fan. Wide range of fan controller: The fan voltage can be independently controlled from 3.7 - 12 V, in addition, the fan can be switched off completely which allows the user to choose between high and ultra-cooling operation. 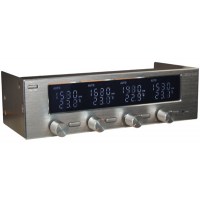