3-D Ultra Pinball, The Lost Continent is an arcade-style pinball game underscored by an action-adventure story line. This game features 15 interlinked tables to move through, but you can also pick the table that offers the greatest challenge right off the bat. 3-D Ultra Pinball: The Lost Continent offers all the sights and sounds you have come to expect from the bestselling pinball series of all time. It supports controllers such as the Thrustmaster Wizard pinball controller, the Microsoft Sidewinder game pad, and the Gravis Gripp game pad.The premise behind this pinball adventure is that sometime after World War II, Rex Hunter, bush pilot and part-time hero for hire, has crash-landed in an unexplored jungle. With him are Professor Spector, a zoologist and famous inventor, and his assistant, Mary. They find themselves in a place protected by time, a world where dinosaurs and cavemen still exist. Someone has hauled off the pieces of their plane in the middle of the night. It's up to Rex to solve the mysteries of the strange land and find their missing plane so they can get back to the world they came from. To do this, Rex and his friends must brave dinosaur attacks, cross treacherous terrain, and outwit cunning traps. The biggest hazard, however, is offered up by the Diabolical Doktor Hekla, who has no intention of letting Rex and his friends escape. 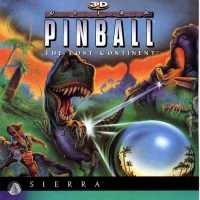